Last week, Prashnam reported in these columns that roughly one in six families in rural areas of six northern states of India said they lost someone to Covid-19. They blamed the Narendra Modi government and their own destiny for this tragedy.

We were flooded with feedback and many researchers used the raw data of our survey to further extend the analysis of the impact of Covid-19. There were plenty of survey suggestions. (You too can write in with your suggestions to [email protected]) Many asked us to probe further the impact of Covid-19 on livelihoods and enquire what people need from the government in these extraordinarily difficult times. We asked two questions to about 15,000 people in the same 967 rural constituencies as the previous survey across 229 districts in six states – Bihar, Haryana, Jharkhand, Madhya Pradesh, Rajasthan and Uttar Pradesh. As always, the sample was chosen using a scientific, randomised and stratified sampling technique.

Q1. If there is one thing that you want the Modi govt to do right away, what would it be?

2: Give a job to one person in my family

Q2. Did you or anyone in your immediate family lose their job in the last six months due to coronavirus lockdown?

We deliberately asked the two questions in this order to not bias the responses. Since the question about their immediate expectations from the central government was the first one, we can be sure that their answers were not influenced by their response to the question on job losses in their family. This is in keeping with well-accepted scientific survey design techniques.

People want vaccine and a job immediately, not cash

More people want a Covid vaccine immediately from the Modi government than anything else. A job for a person in their family was the second largest demand. Surprisingly, a cash transfer was not as desired as a vaccine or a job. The spike in demand for vaccine is consistent with the findings from the previous survey of enormous but unreported Covid fatalities in these same places. This is an important finding as the Modi government  has now altered its vaccine policy to procure directly and distribute to the states rather than following the current quota system of procurement for Centre, states and private sector. 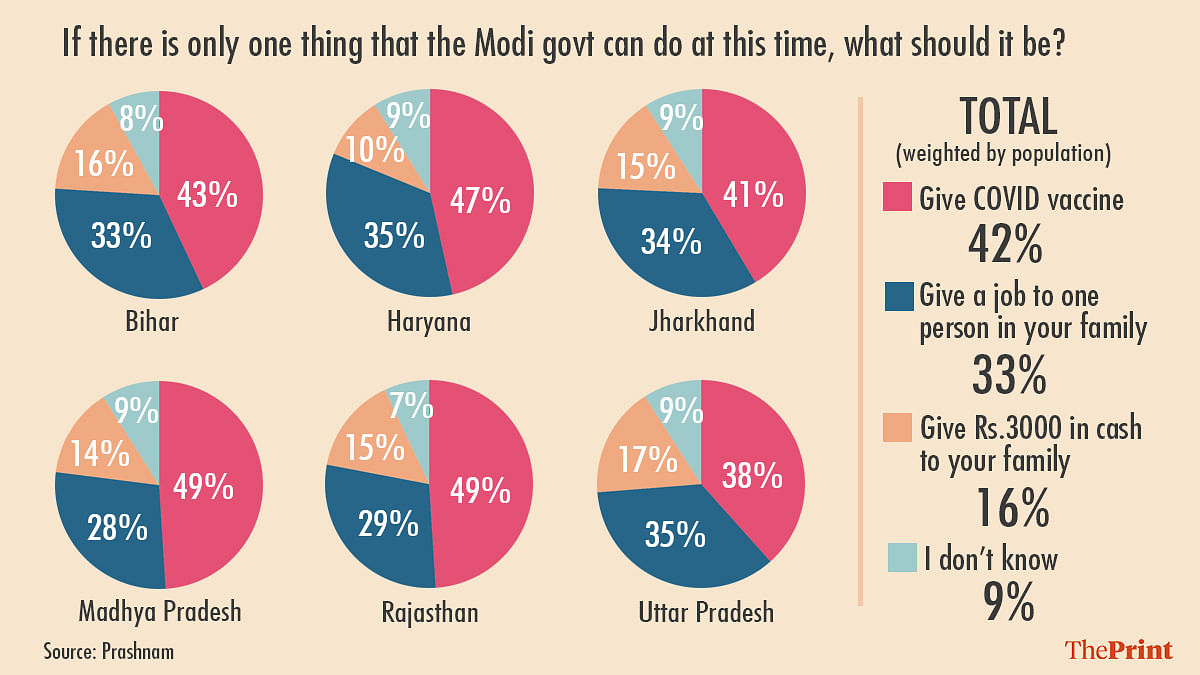 There was significant difference in responses among the states surveyed. In Uttar Pradesh, the demand for a job is higher compared to other states whereas in Rajasthan and Madhya Pradesh, it is the vaccine that is hugely sought after.

Also read: Covid is frightening. But the bigger worry is Indians’ lost hope

One-third of all families lost jobs to lockdown

One-third of people surveyed said that at least one person in their family lost their job in the last six months due to lockdown. Recall, there are roughly 100 million families in these six states. Thirty per cent of families affected by job losses is an extremely high number and it may also confirm the reason behind the demand for MGNREGA work at minimum wages being at an all-time high. Other employment surveys conducted by CMIE and Azim Premji University have also reported extremely high job losses due to the Covid lockdown. Expectedly, a higher share (34 per cent) of families that lost a job want the government to give them employment rather than cash or vaccine. 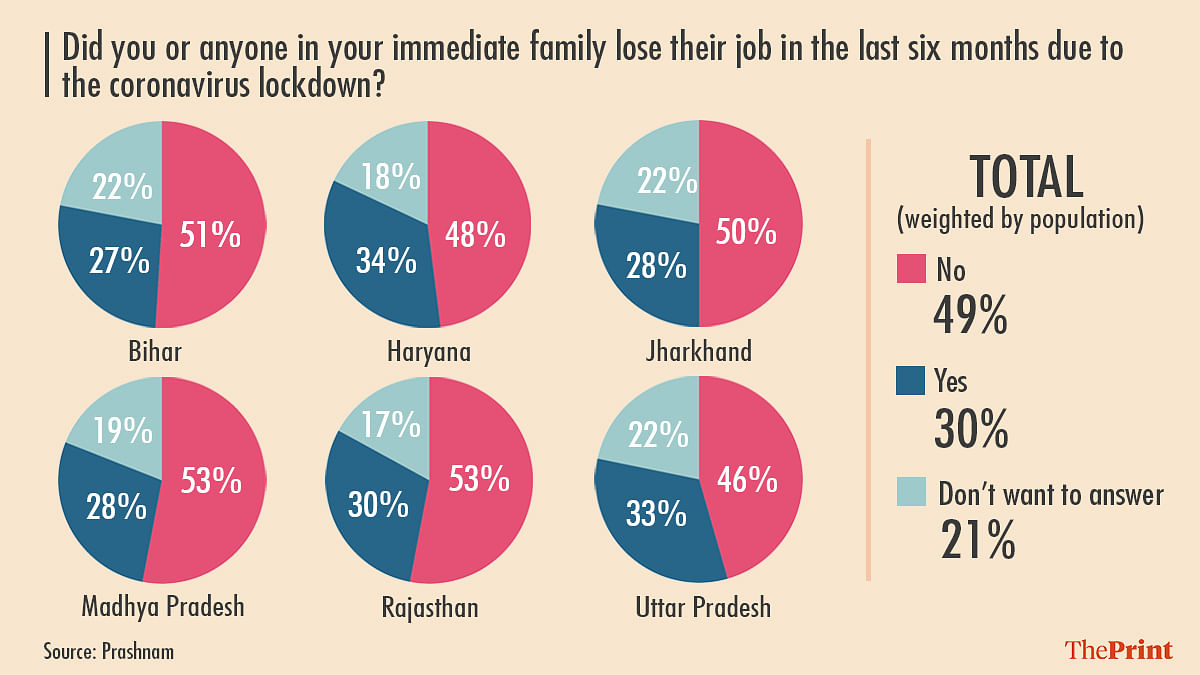 The survey clearly demonstrates the enormous tragedy in terms of lives and livelihoods that Covid-19 has inflicted on our nation. The high demand from the Modi government for vaccines is perhaps a sign that people want to get over this ordeal as soon as possible than be provided with economic relief. Of course, most people may want all (vaccine, job and cash) but since the survey forced people to rank these demands, vaccine comes out on top.

Respondent profile: 14,516 adult Indians responded to this survey. They were from six states— Bihar, Haryana, Jharkhand, Madhya Pradesh, Rajasthan, Uttar Pradesh — belonging to 229 districts. 72 per cent were male and 28 per cent female. 47 per cent were youth (<40 years), 38 per cent middle aged and 15 per cent seniors (>60).

Here is the link to the raw data for those that want to delve further.

The article is part of ThePrint-Prashnam Vox Pop series.