New Delhi: In the shadows of the Taj Mahal, shoemaker Shyambabu Nigam worked for years to save enough money to buy his wife Anju a small house with a view of the iconic 17th century mausoleum. Yet in just a matter of months, they were forced to give it up.

After Anju fell seriously ill with Covid-19 last year, the couple turned to a mix of subsidized government hospitals and more expensive private clinics to treat the illness and pay for two open-heart surgeries that followed. The total costs amounted to more than 600,000 rupees ($8,230) — roughly six times Nigam’s annual income.

While the sale of his modest two-bedroom house covered most of that amount, he was also forced to borrow money from friends and sell one of his three leather sewing machines.

“First we fought to save her life and now we are fighting to survive with a huge financial burden,” said Nigam, 42, from the room he now rents in a low-income village of Kachhpura near Agra in the northern state of Uttar Pradesh. “Please give us any work. My two sons and I will work day and night to get out of this crisis.”

Nigam is among roughly two-thirds of Indians that don’t have any health insurance, compounding the problems facing India’s economy as it tries to recover from the shock of a rare contraction last year. Overcrowded government hospitals with long lines and poor facilities prompt people to spend out of pocket for better treatment in the private sector.

While the virus has affected the poor across the globe, the impact can be exponentially greater in countries like India where public spending on health care is among the lowest in the world. The signs of pain are everywhere: Loans against gold and debt defaults are rising while savings, vehicle sales, company profits and government revenues are falling.

There has also been a clear shift in consumer spending from clothes, shoes and personal care goods toward pharmaceuticals, as medication shortages and panic prompted many Indians to sell motorcycles, gold and even their farm animals to pay for life-saving treatment on the black market. The soaring expenses included vials of the antiviral drug remdesivir as well as private ambulances that ferried desperate families scouring for hospital beds and oxygen cylinders.

“This time what we see is the double whammy of health expenses plus loss of livelihood and related food insecurity,” said Dipa Sinha, a professor of economics at Ambedkar University in Delhi. “If people are selling assets that give them livelihood then it impacts future incomes as well.”

Making matters worse, until recently government-approved treatment guidelines included some medicine not recommended by the World Health Organization. Until early June, India Health Ministry’s approved treatment protocol listed remdesivir even though the global health body discouraged use of the drug for Covid-19 in late 2020 after a large international clinical trial showed that it offered negligible protection against death in hospitalized patients.

The government had also recommended other untested therapies such as the anti-malarial drug hydroxychloroquine and Ivermectin, an anti-parasitic treatment. Convalescent plasma therapy remained on the list despite the Indian Council of Medical Research’s own studies finding little benefit.

Officials from the National Health Authority, responsible for implementing country’s flagship public health insurance program, did not respond to multiple requests for comment, nor did a spokesperson for the federal Ministry of Health.

In rural areas, “people are either left to die or go bankrupt trying to find that life-saver drug or other solution,” said Ajay Mahal, a professor in health economics and global health systems research and deputy director of the Nossal Institute for Global Health at the University of Melbourne.

“The state should begin by offering people an option — a strong and affordable primary care sector — instead of leaving them to their devices to unqualified providers and running around getting drugs from pharmacists, fake or genuine,” he added.

Even government-run hospitals can be costly for the poor: Nigam said he paid a subsidized rate of 200,000 rupees for one of his wife’s bypass surgeries. “I don’t have government health insurance because I didn’t know I was eligible,” he said. “Now I am trying, but there is a long backlog.”

The rising medical debt poses a risk for Modi ahead of key state elections next year, including one in Uttar Pradesh — the country’s most populous state — where Nigam lives. His government’s approval ratings have fallen to 51% this year from 75% in 2019, according to a survey released May 29 by LocalCircles, an India-based polling company. Modi’s personal approval rating dipped to 66% on June 8, down from a high of 76% a year earlier, Morning Consult’s Global Leader Rating Tracker found.

Even before the pandemic struck, India’s out-of-pocket expenses on health care were among the highest in the world, accounting for about 60% of total health expenditure. Public health spending — including both the federal and state governments — hovered well below 2% of gross domestic product, a number that rises to 3.5% when including the private sector. That compares with 5.4% of GDP in China and a global average of nearly 10%, according to World Bank data. 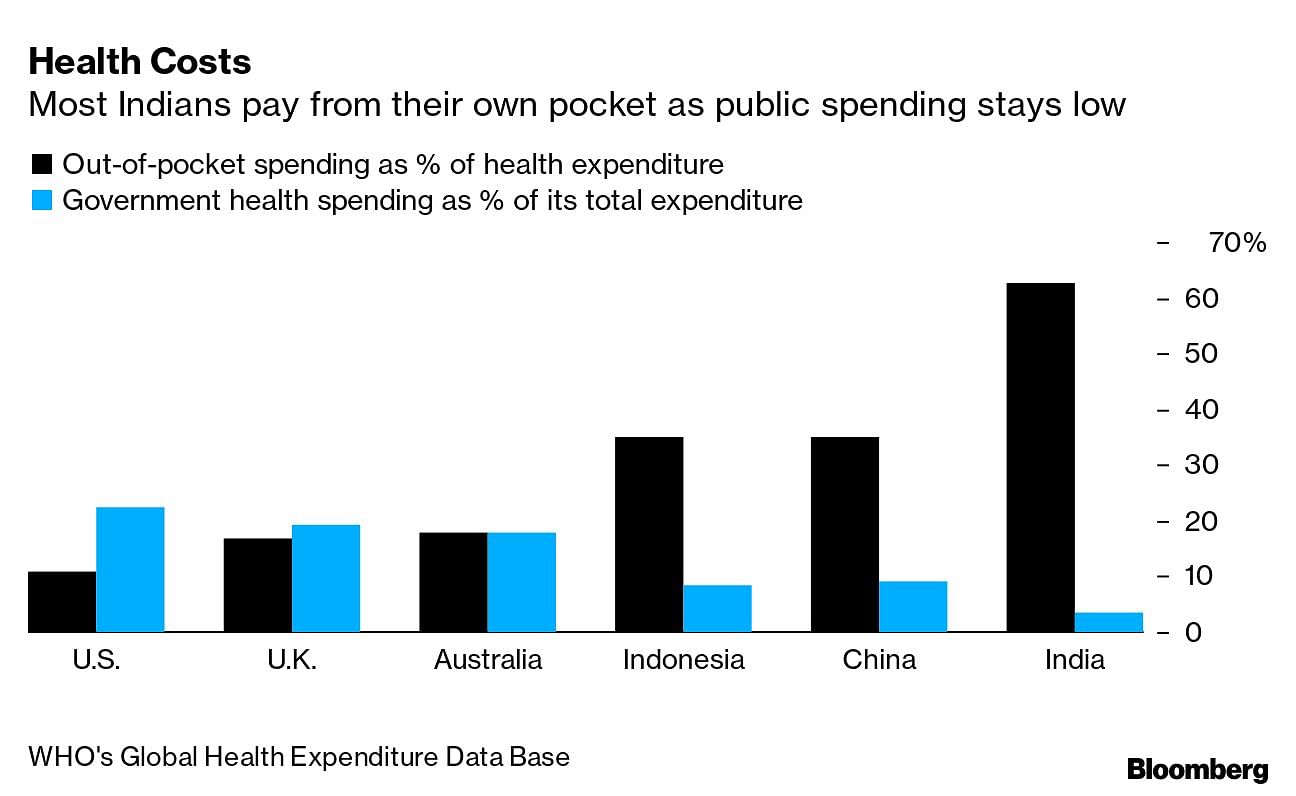 While there’s no data on how many Indians have been pushed to financial ruin by medical debt, researchers at Azim Premji University found that the virus erased decades of gains by pushing an additional 230 million — more than the entire population of Pakistan — into poverty last year. More than 90% of people borrowed a median amount of 15,000 rupees during the pandemic, they said, adding that the impact is expected to persist.

Loans taken to meet out-of-pocket expenses on health can be more damaging than other household debt because the illness “limits one’s ability to work, leading to depletion of household savings and unanticipated economic shocks,” said Sunil Kumar Sinha, an economist with India Ratings and Research.

A study in April and May among a poor community in the eastern state of Jharkhand that found 58% had already borrowed money and 11% had sold assets during the pandemic, according to John Paul, director of the Centre for Rural Development at The/Nudge Foundation. “With no fallback options like savings or insurance, even basic necessities like food have become a challenge to poor households,” he said.

Deep in India’s hinterland the crisis is even more dire, with villagers being forced to reduce their food intake in order to pay for treatment.

In Jharkhand, 24-year-old Soni Devi borrowed 10,000 rupees and sold three of the family’s six pigs to pay for Covid treatment for her mother and three children. Now she’s struggling to feed her family.

“There is not much rice left at home,” said Devi. “We will die if we don’t get work.”-Bloomberg